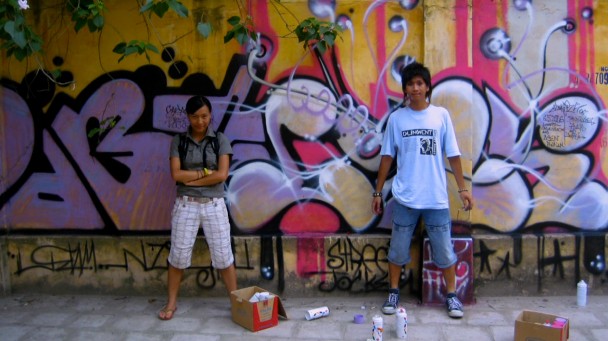 Spray It Don’t Say It – The Propeller Group

This project is an ongoing documentary project that follows the evolution of graffiti in Viet Nam, beginning with the very first generation of graffiti artists who discovered and started to apply American style graffiti 2005.

In a paradoxical land where communist propaganda and capitalist advertising battle for command of the visual landscape, there are some youth who have found a way to interject a little attitude into the mix. Nhu cau ve bay (Spray It, Don’t Say It) is a work-in-progress documentary that explores the underground graffiti scene and the main characters that make up this first generation of graffiti artists in Viet Nam. As an emerging generation struggles to discover and adapt American style graffiti into their own context, how will they negotiate between their need for individual expression and the pressures of cultural identity as they face the pros and cons of making this artistic style their own?