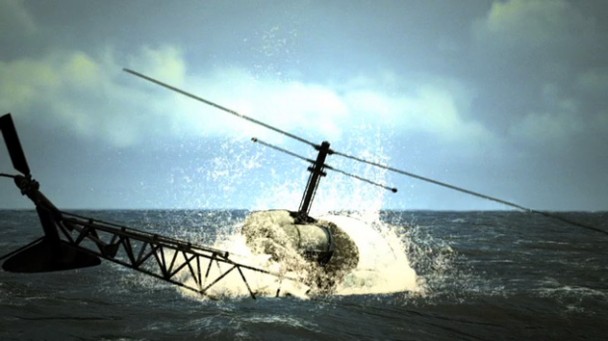 This artwork is Dinh Q. Lê’s first video created entirely in 3D, based on an event that took place on 30 April 1975, at the end of America’s war in Vietnam. With the North Vietnamese Army and Viet Cong marching towards Saigon the Southern Vietnamese Army, American military and USA diplomatic personnel were desperately endeavouring to escape. Hundreds of helicopters packed with escapees were flown toward the South China Sea, searching for aircraft carriers. Many crash-landed when they ran out of fuel; others were pushed off the carriers’ decks into the sea to make room for more to land. Pishkun is a Blackfeet American Indian term referring to the site where roaming bison were killed by driving them over a cliff.

Projected large-scale in a museum setting, South China Sea Pishkun shows the machinery of war in its last moments, crashing, struggling and dying in the sea.