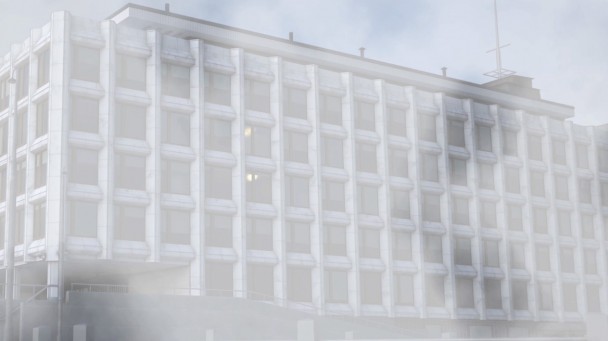 This time lapse film of the Stora Enso Building in Helsinki, Finland has a total running time of 10 days and is now considered one of the longest films ever. Below is an extract from IHME press release.

SUPERFLEX´s installation created for the IHME Contemporary Art Festival is a film and sculpture titled Modern Times Forever (Stora Enso Building, Helsinki). The work shows the Stora Enso building at Kanavaranta 1, Helsinki. The film will be shown in Helsinki Market Square on a 40m2 LED screen, so that the original building can be seen simultaneously with the building in the film. In the film the building changes all the time. The film lasts ten days, i.e. the work lasts as long as its exhibition period. This continuous exhibition period means that the film can be watched 24 hours a day for ten days.

The presence of the IHME Project will add a new temporal dimension to the urban space. Apart from being present in our everyday lives, quietly changing for ten days, the film´s time races ahead at an estimated several-hundred-year gallop each day. The film is a fiction about what could happen to the Stora Enso building as an architectural and ideological symbol, over the next few thousands of years, if the days of humankind come to an end, and only time and the weather affect the building. Via the decaying image of Stora Enso’s headquarters, the work raises issues of climate change, urban planning, Finland’s industrial history, and changes in economic structures. Turn your everyday route towards the Market Square and take a look at the future! The Stora Enso building is an important cityscape landmark, whose style has prompted discussion ever since it was built. The building, referred to by the locals as “the sugar cube”, is Alvar Aalto´s design and was completed in 1962. Its clean white modernist exterior has been an object of love and hate ever since its completion – especially since the spot was previously occupied by a Neo-Renaissance urban palace, the Norrmén house, designed by Theodor Höijer.