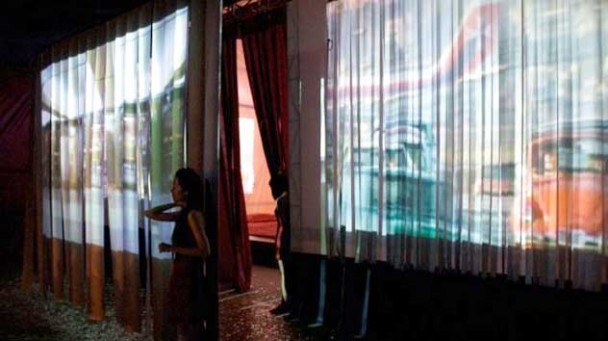 Flaunt Vietnam was throwing a ‘red carpet’ event for Megastar Cinema’s anniversary event. Megestar, Vietnam’s chain of cineplexes that featured high-end cinematic experience, demanded a stunning event that could reflect their brand; something visually impressive and exciting. We were approached by Flaunt Vietnam to help create an impressive video installation that could not only wow guests with beautiful visuals, but acted as the main corridor entry into the next series of lounge areas with mega-sized furniture.

TPG immediately imagined a concept where guests could step into and through the silver-screen, so to speak. This image, taken from our memory banks of scenes from many Hollywood films about movie theatres, became the concept that would lead us to installing a huge “silverscreen” made of highly reflective material, cut into small slats with multiple videos projected onto them. Guests would step through this screen into the next series of rooms. We invited Electrobacillus, a team of super-hip video DJ’s from Bangkok, to help us mix the videos to the music. Electrobacillus are known for their mesmerizing combination of visual and musical mixing and have opened for international acts such as DJ Shadow. Combining old found footage from different films and television shows throughout the decades and mixing them with up tempo electronica, creating a mega-cinematic experience.