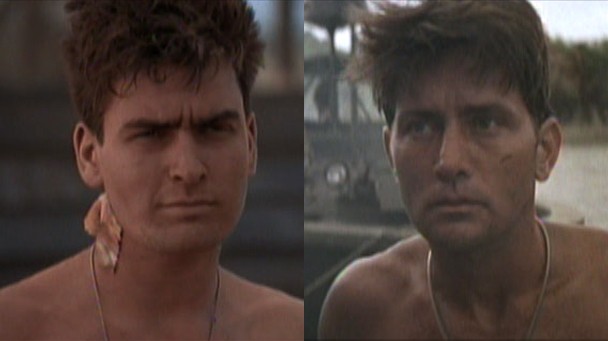 The excerpt below about the piece is written by Hong-An Truong, taken from Idiom Magazine.

The other video in the exhibition, called From Father to Son: A Rite of Passage, is a two-channel video that re-edits scenes from two iconic Hollywood films about Vietnam, Coppola’s Apocalypse Now from 1979 and Oliver Stone’s Platoon from 1986. The video sets in parallel scenes of Martin Sheen in Apocalypse with scenes of Sheen’s real life son, Charlie, inPlatoon. In Lê’s narrative re-working, the two soldiers experience ‘the horror’ of war simultaneously, as if present in the same drama: son witnesses father having a post-traumatic breakdown; son, in turn, has a freak out all his own. Both father and son, portraying young American soliders, must kill an older American solider gone bad. It is a mirroring of the particularly American brand of the patriarchal cycle of violence (what Viet Nguyen has called – writing about Lê’s work – “Americas great cinema industrial complex.”). It suggests not simply that violence is learned through our fathers, but also, in a Freudian turn, that we must kill our fathers in the process of learning. It’s an Oedipal moment too, positing that the mother nation / mother Capitalism has cast a spell on us all. Even further, the two scenes do the tricky work of redemption; each attempting to restore the fallen American heroism as the bad, evil or misguided masculinity is purged, literally, through a performance of a less tainted, ‘good’ violence.