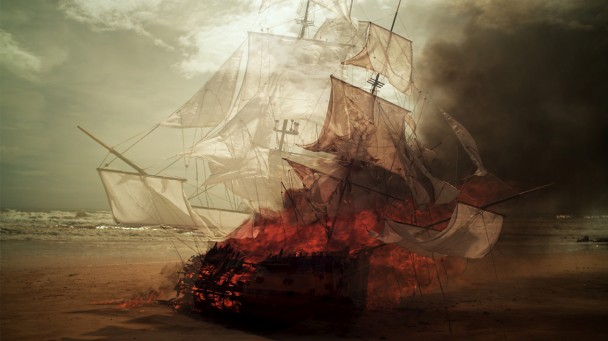 This large multimedia installation by Dinh Q. Le features a 5 meter wide video projection and an installation including several objects including large wooden ship placed in the gallery. TPG produced and directed the film project of the infinite loop of an old 16th century ship constantly in flames.

The artist’s message was complex, but his brief was straight-forward: large, beautiful, and sublime. So we built a large, to-scale-model of a 16th century ship and transported it to a hidden beach location near Phan Thiet, Viet Nam. Our Art/Tech department rigged the ships with detonation devices to set the ships aflame while the camera was rolling. Three ships were created and burned in total. No passengers were harmed.

Sherman Contemporary Art Foundation (SCAF) presents Erasure, a newly commissioned work by Vietnamese artist Dinh Q. Lê – an interactive sculptural and video installation that draws on recent debates in Australia concerning refugees and asylum seekers.
The darkened gallery space will be dominated by a floor-to-ceiling moving image of an 18th century tall ship beached on an isolated coastline slowly being consumed by flames. The gallery floor will be strewn with small islands of debris – discarded clothing and wooden fragments. Amid the destruction will be thousands of small black and white photographs – self-portraits, family and passport photos – which Dinh spent years buying in second-hand stores in the hope of finding his own family’s pictures.
During the exhibition, visitors are encouraged to pick up these photographs which will be removed one by one, scanned, catalogued, stored and uploaded to a purpose built website (www.erasurearchive.net) for people to browse through this collection of oan hon (lost souls) and perhaps find their own families.