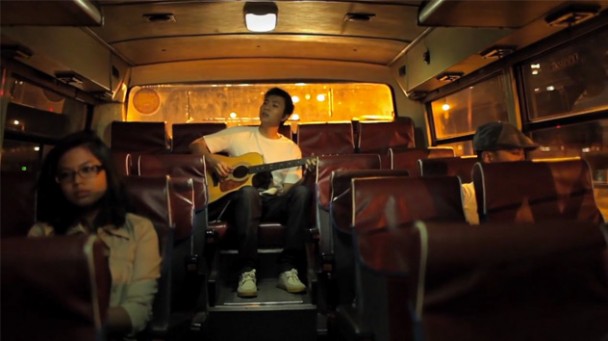 We were extremely delighted to get the chance to give a visual presence to this song, who’s title loosely translated into English means “Who’s Still Waiting for Who”. The lyrics, poetic and deep, saturated with a feeling of longing, accompanied by the sounds of a genuine guitar, makes this song unique and sincere. We wanted to stay loyal to that sense of sincerity and the beauty of its simplicity. Using very limited resources and a limited timeline, TPG wanted to capture the mood of the song and the poetic contradictions of existing between moving and waiting.

Our concept was to create [or find] a shooting environment, where the lighting conditions would change, but the “stage” would stay the same. A shooting situation where we would use no lighting setup, but oculd give us a variety of looks. Ultimately, we came up with the idea to shoot on a bus that travels throughout Saigon at night. This give us a unique lighting situation that only a city like Saigon could. The bus, used by a large number of the city’s inhabitants, became the metaphor for this sense of uncertainty and the feeling of anonymity that the song captures.

Shot in less then 5 hours with a super-minimal budget and all the challenges of shooting on a moving bus, we were able to capture a mood that takes the listener/viewer into a world only Anh Khang’s musical sensibilities could conjure.

Thanks to Bao Ngoc and all the extras on the bus.